ASGC Awarded Contractor of the Year

MEED has announced the names of the best companies and business leaders in the GCC at the MEED Awards 2018.

Four individuals and 16 companies were recognized for their business achievements and contribution to the region over the past year at a gala awards ceremony held at Dubai’s RitzCarlton Hotel on 28 November.

The award winners were recognized for their achievements in environmental sustainability, worker welfare and innovation, as well as the performance of their business over the past year.

The MEED Awards recognize the best companies in the GCC across all sectors.

The awards aim to promote best practice in business and showcase outstanding performance in key areas of operation such as innovation, worker welfare and sustainability.

The MEED Awards 2018, which are delivered in association with UAE construction giant Arabtec, international healthcare giant NMC and consultant SNC Lavalin, comprise 16 award categories and saw hundreds of entries from companies across the region.

The judging process comprised two rounds of shortlisting and a presentation by the entrepreneurs or business leaders to the judges.

Contractor of the Year: ASGC 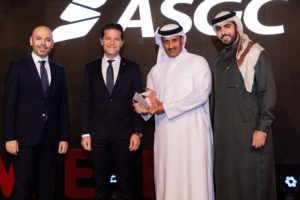 What the judges said: “ASGC stood out in this very competitive category. Judges were hugely impressed by the company’s commitment to driving continuous improvement across all areas of activity. Its adoption of cutting-edge technologies, outstanding commitment to meeting the highest standards of sustainability, and impressive safety performance have set a new benchmark for contracting in the region that others must aim to match.”