UAE’s ASGC to implement BIM in all its departments 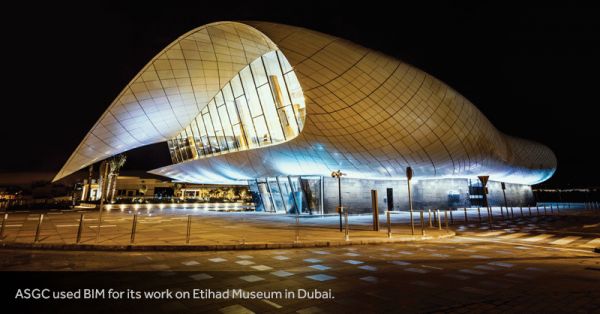 Dubai-headquartered construction company, ASGC, has revealed that it will expand the implementation of building information modelling (BIM) to include all its departments starting next year.

Mohamed Marzouk, technical director at ASGC, told Construction Week: “ASGC’s BIM strategy in the next year is to implement BIM in all the company’s departments and use it as language for communication and coordination.

“More development in using BIM 5D is targeted to connect [the] cost control, procurement, tender, and financial departments, [as well as] to produce an optimised cost plan before physical construction.”

According to Marzouk, the company aims to use BIM “as an internal language between all departments and as an external language with consultants and clients” in order to boost the company’s performance and ensure project quality and timely delivery.

“Moreover, ASGC [is carrying out] research and experimentation on 3D printing to extend the benefits of BIM,” he continued.

Research on BIM is necessary to get the GCC construction industry up to speed with regions like Europe and North America when it comes to BIM adoption.

He said: “BIM adoption has rapidly increased in [the last few] years in Europe, North America, and Asia. High awareness of BIM benefits among construction industry [stakeholders] and governments in these regions is supporting the spread of BIM, in addition to many publications and research [on the topic].

“[Furthermore,] BIM is mandated in countries like the US, the UK, and Singapore. And while BIM [is starting to gain popularity] in the GCC, it is only mandated by Dubai Municipality.

“[And there is a need for more] research and [published information] to convince all parties in the GCC contracting industry with the numerous benefits of using BIM,” added Marzouk.

In addition to boosting awareness on the benefits of BIM, he noted that the industry needs to address other challenges.

He elaborated: “Lack of BIM specialists, non-existence of standards, and uncertain profitability are factors negatively affecting the [adoption] of BIM in the GCC.”

One example of a project it developed with the use of BIM is Etihad Museum, which recently won The Best New Museum in the Middle East and Africa award at The Leading Culture Destinations Awards 2017 in London, where it also placed first runner-up in the Best Museum Architecture of the Year category.

Read about how ASGC applied BIM in the Etihad Museum project in Construction Week’s special report on BIM, coming out in issue 673, which will be published on 21 October, 2017.